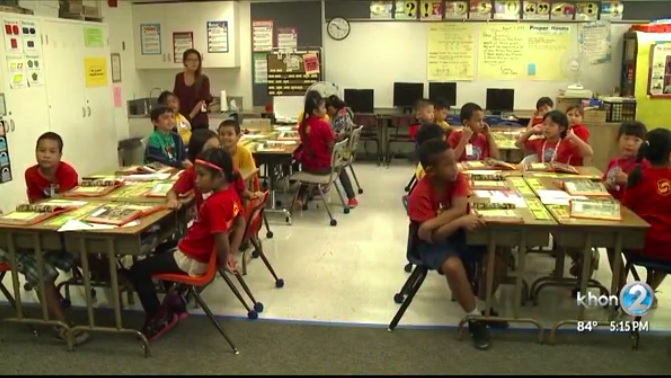 HONOLULU (KHON2) - Here in Hawaii, we like to promote the well-being of our children.

How well do we stack up against the rest of the country?

According to the 2018 Kids Count study Hawaii ranked 24th out of 50 states.

The study looked at several factors like economy, health, family and community.

However, we got low marks for housing and education.

The Data Book - which examines trends in child well-being across areas that represent what children need most to thrive - found that while there have been some gains on education measures, Hawaii still falls behind in the education domain, ranking 37th out of 50 states.

"Specifically graduation rates have improved and reading and math proficiency rates," said Ivette Rodriguez Stern, the Hawaii KIDS COUNT project director at the University of Hawaii Center on the Family. "But our proficiency rates remain below the national average and the main ranking to us signals a need for greater investment in public education."

Hawaii did really well in health, since most of our kids have health insurance.

We had a low teen birth rate.

"Reading and math proficiency rates have seen improvements over the past decade," added Rodriguez Stern."But our proficiency rates are still below the national average and Hawaii has hovered in the bottom third in the country when it comes to education for a good part of the decade. This signals a need for greater investments in our public education if we're going to work toward greater improvements."

While the majority of other states rely heavily on property taxes to fund public education, Hawaii currently funds it at the state level from the general fund.

The constitutional amendment will be put to Hawaii voters in the November ballot.

"As one of the lowest-rated school districts for spending per student, Hawai'i needs to find new ways to increase funding for education," said Deborah Zysman, executive director of the Hawaii Children's Action Network, which advocates for policies that support child well-being. "If approved by voters, this amendment will provide an option to increase funding without increasing the tax burden on Hawaii residents. This additional funding for education can lead to better results in test scores, school completion, college attendance and job opportunities later in life for our keiki."

The annual Data Book uses 16 indicators to rank each state across four domains - education,
economic well-being, health and family and community. Findings in the other domains include:

• Hawaii has seen improvement in almost all indicators of economic well-being over the
post recession years, including the percentage of children in poverty, children whose
parents lack secure employment, and children in households with a high housing cost
burden. However, Hawai'i continues to have one of the worst housing cost burden rates
in the nation, ranking 48th on the housing indicator, and ranking 30th in the economic
well-being domain.

• Hawaii continues to do well in the health domain, ranking 13th in the nation. Hawai'i has
among the smallest share of children without health insurance (2 percent), tying for
second in the nation on this indicator.

• Hawaii is also doing well in the area of family and community, ranking 12th in this
domain. There were no significant changes in the percentage of children in single-parent
families, in families where the household head lacks a high school diploma, and living in
high-poverty areas over the past decade. However, following the national trend, the teen
birth rate in Hawai'i has continued its impressive decline and is down 42 percent from
2010.

This year's Data Book also calls attention to the roughly 4.5 million young children in the United States who live in neighborhoods where there is a high risk of failing to count kids in the 2020 census.

An undercount of young children in the upcoming decennial census would short-change child well-being over the next decade by putting at risk hundreds of millions of dollars of federal funding for programs that are critical to family stability and opportunity. Based on census data,

An inaccurate 2020 census will also adversely affect research and advocacy efforts that use data to identify and analyze problems, document disparities, develop policy solutions and evaluate the efficacy of programs for years to come. "We hope to partner with child advocates and other local stakeholders to explore ways of ensuring that all of Hawai'i's kids are counted," said Stern.

The Foundation offers the following recommendations to achieve a more accurate census:
• maximize the U.S. Census Bureau's capacity by fully funding census outreach efforts
and appointing a qualified and permanent director to lead the agency;
• have state and local governments and community organizations invest in educational
outreach to ensure the most vulnerable communities are counted;
• broaden the circle of messengers (from child care providers to members of the clergy)
and organizations (from public schools to libraries) who can provide outreach in their
communities;
• address the digital divide by providing all families online access either in local libraries
or schools; and
• address privacy and confidentiality concerns.

The 2018 KIDS COUNT Data Book will be available at www.aecf.org.

Additional information is available at www.aecf.org/databook, which also contains
the most recent national, state and local data on hundreds of indicators of child well-being.

Journalists interested in creating maps, graphs and rankings in stories about the Data Book can
use the KIDS COUNT Data Center at datacenter.kidscount.org.

About the University of Hawai'i Center on the Family
The University of Hawaii at Manoa serves approximately 20,000 students pursuing more than
225 different degrees. Coming from every Hawaiian island, every state in the nation, and more
than 100 countries, UH Manoa students thrive in an enriching environment for the global
exchange of ideas. For more information, visit http://manoa.hawaii.edu.

The Center on the Family is a unit within the College of Tropical Agriculture and Human Resources (CTAHR) at the University of Hawaii at Manoa. The Center serves as the KIDS COUNT grantee in Hawaii. Its mission is to enhance the well-being of Hawaii's families through interdisciplinary research, education and community outreach. For more information about the Center, visit www.uhfamily.hawaii.edu.

Copyright 2018 Nexstar Broadcasting, Inc. All rights reserved. This material may not be published, broadcast, rewritten, or redistributed.