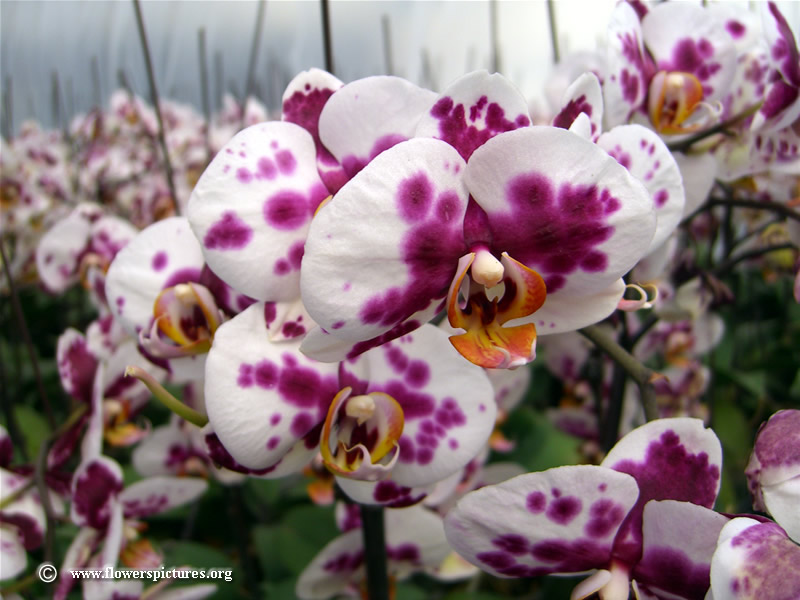 Phalaenopsis /ˌfælɨˈnɒpsɪs/ Blume (1825), known as moth orchids, abbreviated Phal in the horticultural trade,[2] is an orchidgenus of approximately 60 species. Phalaenopsis is one of the most popular orchids in the trade, through the development of many artificial hybrids. It is native to southern China, the Indian Subcontinent, Southeast Asia (Thailand, Philippines,Malaysia, Indonesia, etc.), New Guinea, the Bismarck Archipelago, and Queensland.[1][3]

The generic name from Greek means φαλαινα "Phalaen[a]-like" and is probably a reference to the genus Phalaena, the name given by Carl Linnaeus to a group of large moths; the flowers of some species supposedly resemble moths in flight.[4]For this reason, the species are sometimes called moth orchids.

They are native throughout southeast Asia from the Himalayan mountains to the islands of Polillo, Palawan and Zamboanga del Norte in the island of Mindanao in the Philippines and northern Australia. Orchid Island of Taiwan is named after this genus. Little recent information about their habitat and their ecology in nature is available since little field research has been done in the last decades.

Most are epiphytic shade plants; a few are lithophytes.[5] In the wild, some species grow below the canopies of moist and humid lowland forests, protected against direct sunlight; others grow in seasonally dry or cool environments. The species have adapted individually to these three habitats.

Possessing neither pseudobulbs nor rhizome, Phalaenopsis shows a monopodial growth habit: a single growing stemproduces one or two alternate, thick, fleshy, elliptical leaves a year from the top while the older, basal leaves drop off at the same rate. If very healthy, a Phalaenopsis plant can have up to ten or more leaves. The inflorescence, either a raceme orpanicle, appears from the stem between the leaves. They bloom in their full glory for several weeks. If kept in the home, the flowers may last two to three months after which a Phalaenopsis Orchid will need to conserve energy for further leaf, bud and root development.[6]

Some Phalaenopsis species in Malaysia are known to use subtle weather cues to coordinate mass flowering.[citation needed]