Why it's important to count all keiki

The 2020 Census is critical to our community as will determine how much federal funding we receive, which is especially important for programs that support our children and families.

In the 2010 census, Hawaiʻi had the 10th highest undercount of children ages 0-4. Only 68% of Hawai‛i residents participated in the 2010 census, which resulted in Hawaiʻi losing $16 million in federal funding for healthcare, child care, adoption assistance, and foster care. In rural areas of Oʻahu, only 46% of households filled out the 2010 Census and only 54% in some parts of the neighbor islands. In those places, less than half our children and families were being counted. Some families fear that sharing their information could be harmful to them; however, federal census workers are bound to confidentiality.

As of June 12, 2020, only 55.7% of households in Hawaiʻi completed the 2020 Census. It is critical to get the most accurate results. Governments, businesses, nonprofits, and other organizations rely on data from the U.S. Census Bureau, and an inaccurate count will impact the quality of decisions made each day.

Hawaiʻi Children’s Action Network is working to ensure all keiki are counted in the 2020 Census. If you would like to help us count all keiki and families in Hawaiʻi, you can find more information here. If you haven’t filled out the census yet, visit my2020census.gov or call 844-330-2020 to respond today.

Recent news articles on the importance of the 2020 census:

How the Census Affects Your Daily Life, From COVID-19 Relief To Your Child’s Education – WBEZ, April 1, 2020 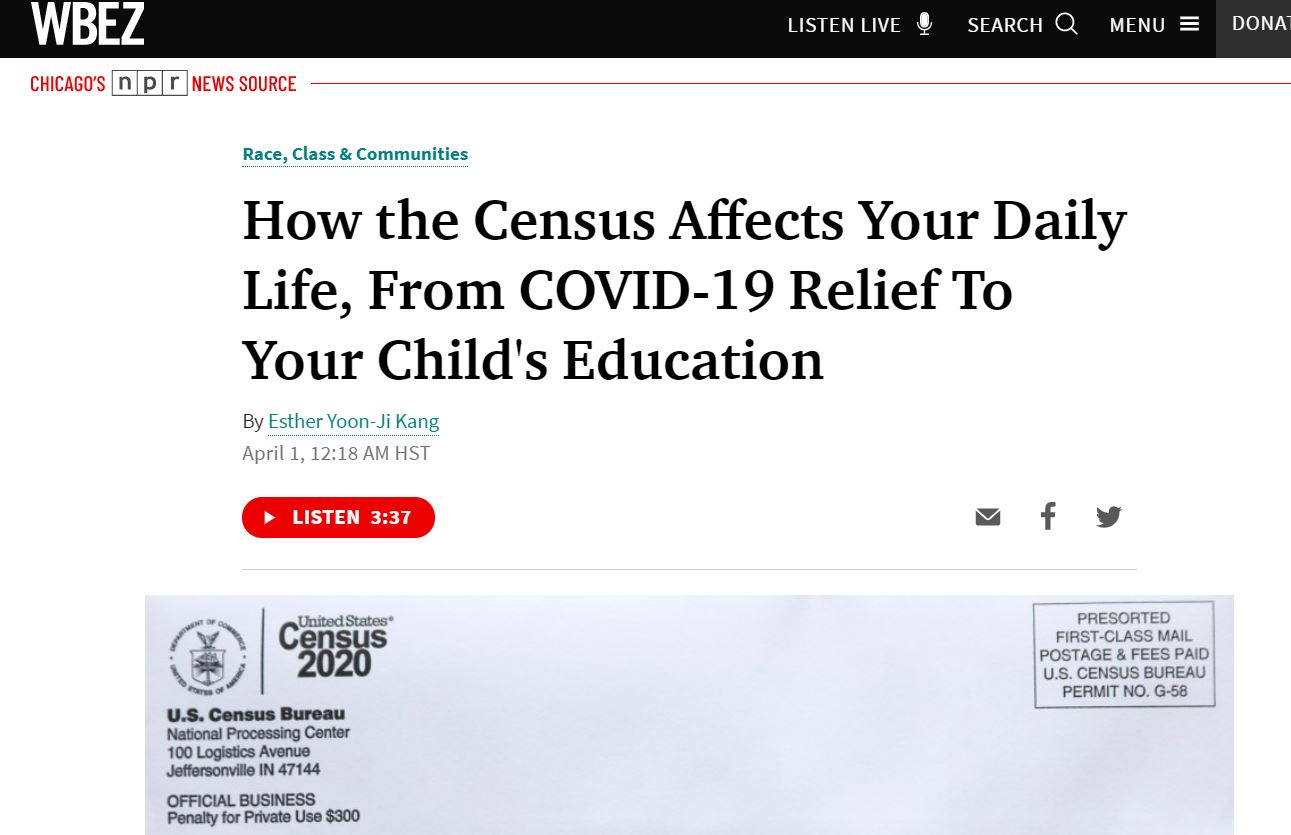 The decennial census determines congressional apportionment and federal funding. When households fill out the census, each individual becomes a part of a basic population count used for surveys and datasets produced by the U.S. Census Bureau.

WBEZ reports that the census even plays a role in national emergencies, like the COVID-19 crisis. For example, census data is helping the Federal Emergency Management Agency (FEMA) determine relief and recovery efforts based on how many people live in specific areas. Additionally, an accurate census count allows public health officials to understand the spread of viruses and the groups most affected by it to help prevent further spreading.

Census data plays an important role in determining how federal funds are spent on key services for students, like special education programs, school lunches, assistance to schools in high poverty areas, and student loans. If children are undercounted, they could miss out on these programs and services for the next 10 years.

Businesses also use census data to make daily decisions, including the types of products and services they offer and even how much to pay employees. The population census is the baseline for all data collection conducted by the Census Bureau. 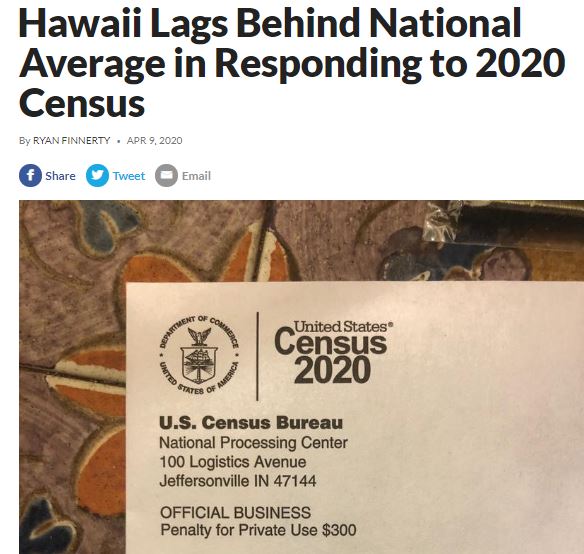 Hawaiʻi’s census response rate is below the national average. Households have been reminded via mail to complete the Census as it is required by law. Hawaiʻi Public Radio reports that this year, census outreach efforts are different due to the COVID-19 pandemic. Usually, the federal government hires thousands of people to go knock on doors and find out the number of people who have not responded by mail, especially among hard to count groups like people experiencing homelessness and rural communities. This in-person outreach has been suspended to eliminate the risk of spreading coronavirus.

For people who have moved around due to the pandemic, they should fill out the census based on where they would have normally been on April 1st. For those confused, the Census Bureau has put together a guide on a wide range of special circumstances. 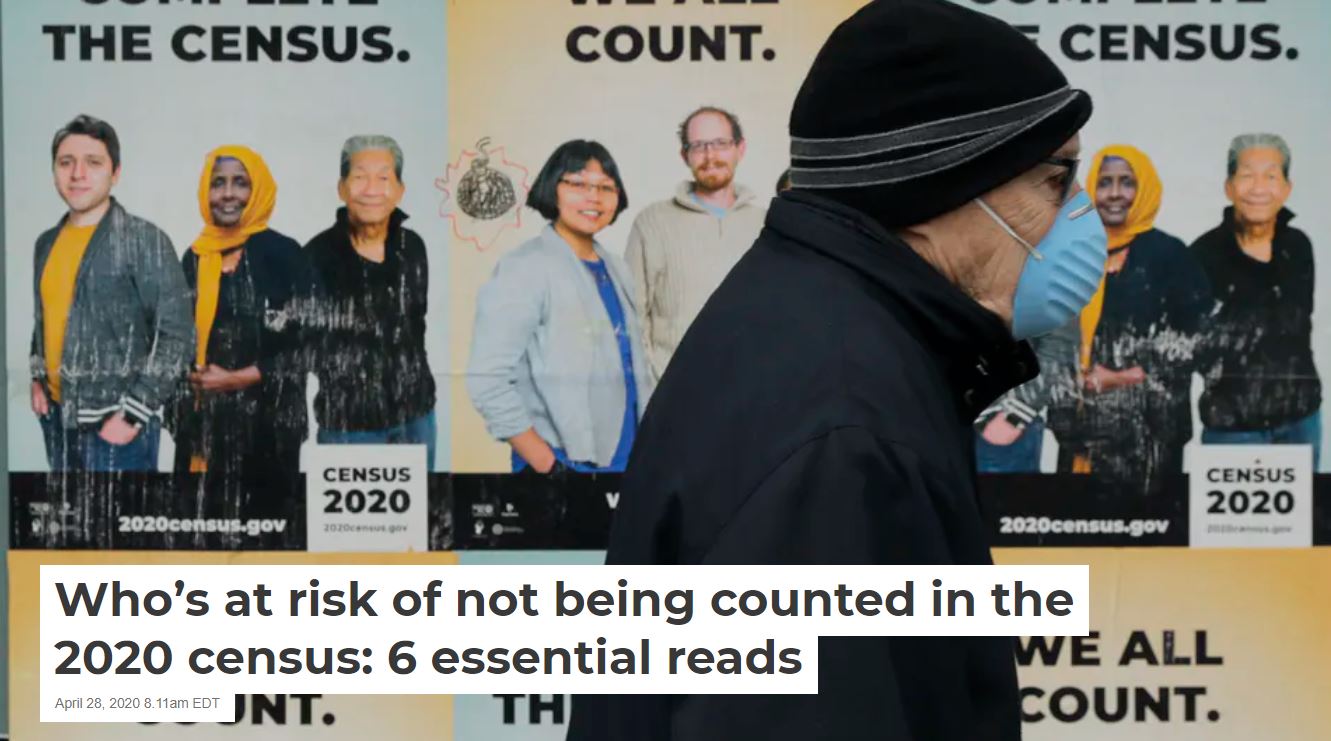 The Conversation reports that in the 2010 census, about 16 million people were likely missed from the final count. If one area is counted less than another, it may be less represented politically or may not receive accurate funding for the next 10 years. In the 2010 Census, research shows that many groups were undercounted, including 4.9% of Native Americans, 4.6% of young children, 2.1% of Black Americans, 1.5% of Hispanic Americans, and 1.1% of renters.

Children under 5 are one of the hardest groups to count, according to a Mississippi State University professor, and an estimated 1 million were left off the 2010 census. Researchers suggest several reasons why these groups are undercounted, such as being difficult to contact due to living in a gated community or reservation, being unable to complete the form because of low literacy or have limited English proficiency, or believing that their responses will be used against them.

Sign up to receive our newsletter, alerts and upcoming events to support Hawaii’s keiki.
Don’t worry, you can unsubscribe at any time.