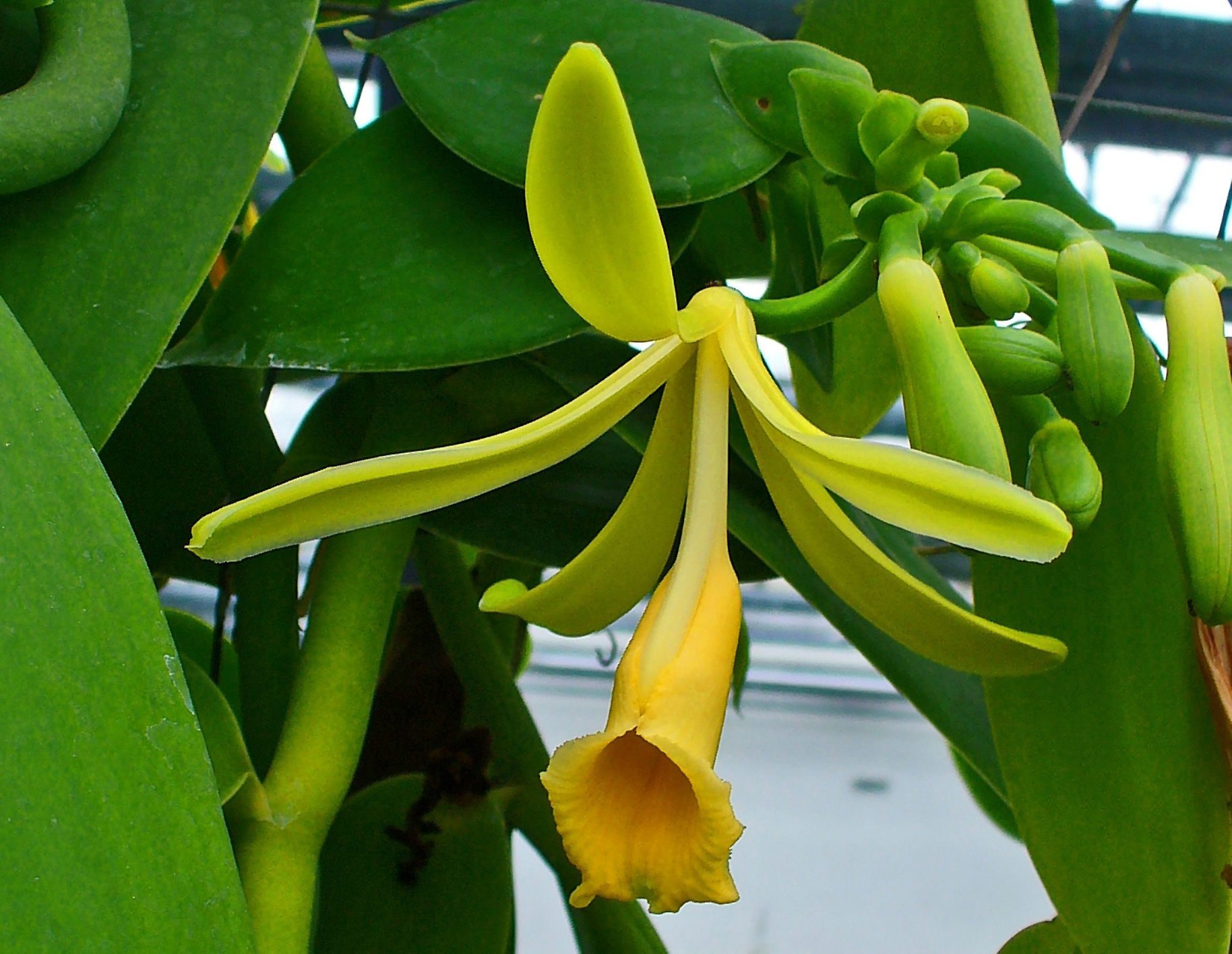 Vanilla, the vanilla orchids, form a flowering plant genus of about 110 species in the orchid family (Orchidaceae). The most widely known member is the Flat-leaved Vanilla (V. planifolia), native to Mexico, from which commercial vanillaflavoring is derived. It is the only orchid widely used for industrial purposes (in the food industry and in the cosmetic industry). Another species often grown commercially but not on an industrial scale is the Pompona Vanilla (V. pompona).

This evergreen genus occurs worldwide in tropical and subtropical regions, from tropical America to tropical Asia, New Guinea and West Africa.[1] Five species are known from the contiguous United States, all limited to southern Florida.[2]

Vanilla was known to the Aztecs for its flavoring qualities. The genus was established in 1754 by Plumier, based on J. Miller. The word vanilla, derived from the diminutive of the Spanish word vaina (vaina itself meaning sheath or pod), simply translates as little pod.

This genus of vine-like plants has a monopodial climbing habitus. They can form long thin stems with a length of more than 35 m, with alternate leaves spread along their length. The short, oblong, dark green leaves of Vanilla are thick and leathery, even fleshy in some species. But there are also a significant number of species that have their leaves reduced to scales or have become nearly or totally leafless and appear to use their green climbing stems for photosynthesis. Long and strong aerial roots grow from each node.

The racemose inflorescences short-lived flowers arise successively on shortpeduncles from the leaf axils or scales. There may be up to 100 flowers on a single raceme, but usually no less than 20. The flowers are quite large and attractive with white, green, greenish yellow or cream colors. The flowers' sepalsand petals are similar. The lip is tubular-shaped and surrounds the long, bristlycolumn, opening up, as the bell of a trumpet, at its apex. The anther is at the top of the column and hangs over the stigma, separated by the rostellum. MostVanilla flowers have a sweet scent.

Blooming occurs only when the flowers are fully grown. Each flower opens up in the morning and closes late in the afternoon on the same day, never to re-open. If pollination has not occurred meanwhile, it will be shed. The flowers are self-fertile but need pollinators to perform this task. The flowers are presumed to be pollinated by stingless bees (e.g. Melipona) and certain hummingbirds, which visit the flowers primarily for nectar. Hand pollination is the most reliable method in commercially grown Vanilla.

The fruit is termed "vanilla bean", though true beans are fabaceaen eudicotsnot at all closely related to orchids. Rather, the vanilla fruit is technically an elongate, fleshy and later dehiscent capsule10–20 cm long. It ripens gradually for 8 to 9 months after flowering, eventually turning black in color and giving off a strong aroma. Each pod contains thousands of minute seeds, and both the pods and seeds within are used to create vanilla flavoring.

Vanilla species are used as food plants by the larvae of some Lepidoptera species, such as the wooly bear moths Hypercompe eridanus and H. icasia. Vanillaplantations require some sort of tree planting for the orchids to climb up on; off-season or when abandoned, they may serve as habitat for animals of open forest, e.g. on the Comoros for Robert Mertens' Day Gecko (Phelsuma robertmertensi).