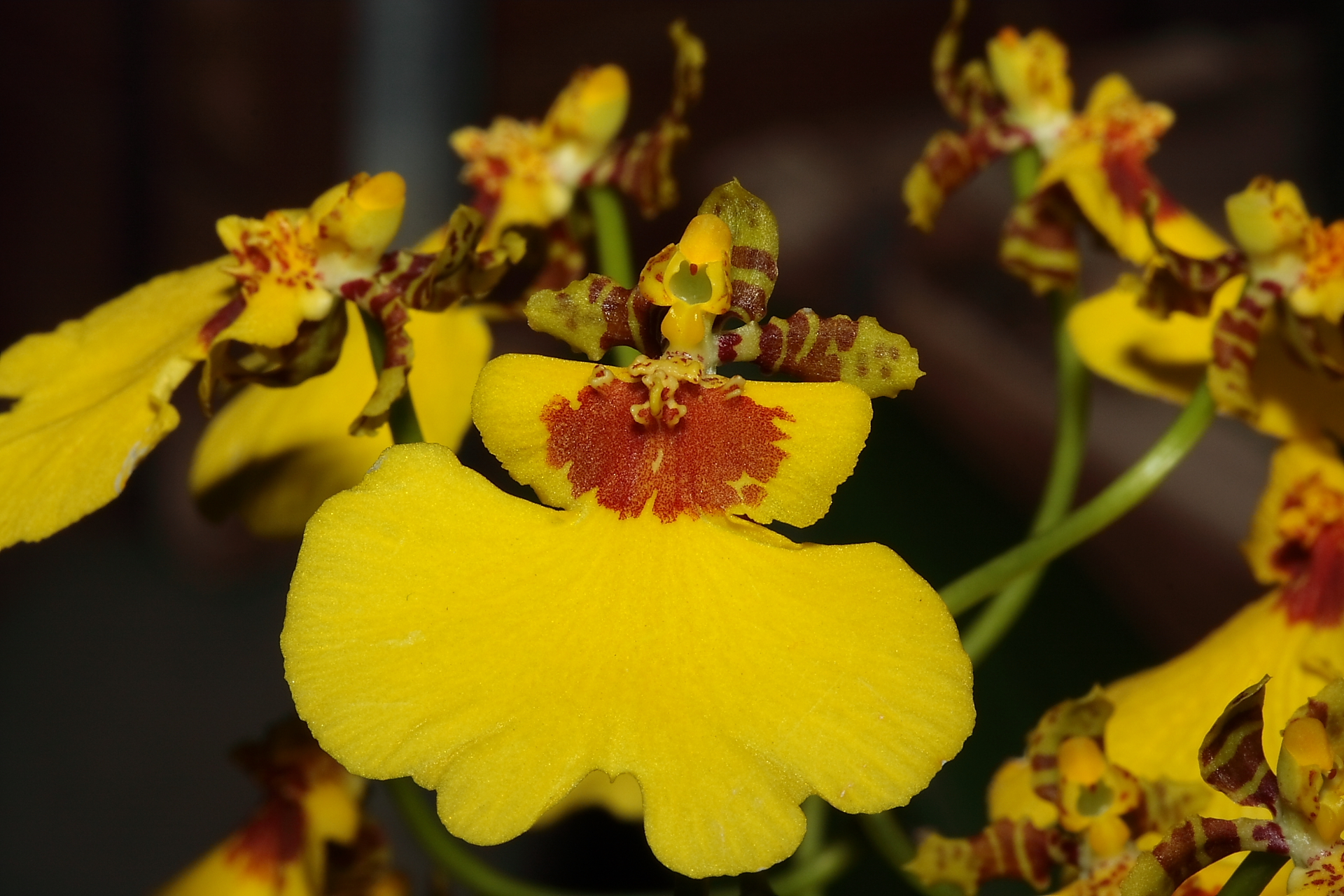 Oncidium, abbreviated as Onc. in the horticultural trade,[2] is a genus that contains about 330 species of orchids from the subtribe Oncidiinae of the orchid family (Orchidaceae). As presently conceived (May 2014), it is distributed across much ofSouth America, Central America, Mexico and the West Indies, with one species (O. ensatum) extending into Florida.[1][3]Dancing-lady orchid is a common name for some species in this genus.[4]

In 2008, Oxfords Annals of Botany labeled the Oncidium alliance "grossly polyphyletic."[5] The American Orchid Societylabeled this genus a "dumping ground."[6] After DNA testing and much debate, a consensus was announced (April 2013)[7]resulting in major taxonomic changes to Oncidium, Gomesa, Odontoglossum, Miltonia, and others. Much of this debate and subsequent housekeeping was initiated by significant research for the scientific publication Genera Orchidacearum Volume 5.[8] As a result, much of the information in this article is now deprecated, but still of great value. One significant change is the move of most Brazilian Oncidium with a fused lateral sepal to the genus Gomesa.[6][5] The Royal Horticultural Society system, the World Checklist of Monocots database at http://apps.kew.org/wcsp/home.do and the American Orchid Society have already updated their databases to reflect most of these changes.

This genus was first described by Olof Swartz in 1800 with the orchid Oncidium altissimum, which has become the type species. Its name is derived from the Greek word ὀγκος, "onkos", meaning "swelling". This refers to the callus at the lower lip.

Most species in the Oncidium genus are epiphytes, although some are lithophytes or terrestrials. They are widespread from northern Mexico, the Caribbean, and some parts of South Florida to South America. They usually occur in seasonally dry areas.

They can be divided in three categories, according to their growth pattern:

Oncidium species are characterised by the following properties :

The flowers of the Oncidium genus come in shades of yellow, red, white and pink. The petals are often ruffled on the edges, as is the lip. The lip is enormous, partially blocking the small petals and sepals.

Some Oncidium orchids are very long : Oncidum altissimum and Oncidium baueri can grow to a height of 5 m, while Oncidum sarcodes can reach 3 m.

They are known as 'spray orchids' among some florists. They are very varied and are easily hybridised with Odontoglossum. Together with other closely related genera (Cochlioda, Miltonia, Cuitlauzina, Miltoniopsis, Osmoglossum, Leochilus, Comparettia, Cyrtochilum, Odontoglossum, Tolumnia, Rhynchostele [formerlyLemboglossum], Psychopsis, etc.) they form the Oncidium alliance. Some of the best Oncidium alliance hybrids originate from Oncidium tigrinum and Oncidium incurvum, when crossed with Odontoglossums, although hybridization possibilities of this group of orchids are endless, and there are literally hundreds of thousands of excellent hybrids in the Oncidium alliance.