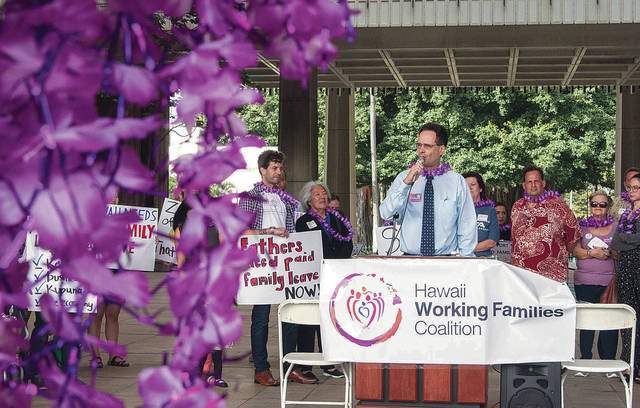 Hawaii workers would have access to several weeks of paid time off for the birth or adoption of a child or to care for a family member under proposed legislation advancing in both the House and Senate.

Senate Bill 2990 and House Bill 2598 would pave the way for a state-managed paid family leave program. The nearly identical bills direct the state Department of Labor and Industrial Relations to come up with administrative rules by Jan. 1, 2020, to “establish and codify paid family leave for all workers in the state.”

The bills say the rules would need to create a program that includes coverage for all employees of employers that employ one or more employees; job protection for employees who use paid family leave; an unspecified minimum number of weeks of leave; and a system of so-called progressive wage replacement that allows low-income workers to receive a higher percentage of weekly earnings.

If approved, the remaining details of the program would be fine-tuned by an “implementation board” made up of stakeholders and experts including large- and small-business owners, labor unions, state department heads and family leave advocates. The board would be tasked with analyzing potential models and the associated costs to implement and sustain each model.

The bills direct the board to consider at least two models: a so-called social insurance program where payroll deductions would be used to fund the program, and an expansion of temporary disability insurance to provide paid family leave.

The House Labor and Public Employment Committee and the Senate Labor Committee voted Tuesday to advance the measures.

“Everybody recognizes how unaffordable living in Hawaii is. And it’s particularly unaffordable when someone is faced with the choice of having to care for a loved or go to work,” said Rep. Aaron Ling Johanson, chairman of the House Labor and Public Employment Committee. “Right now that’s the choice that so many are faced with because even if they can take family leave, it’s unpaid.”

Supporters of paid family leave, many of them mothers with young children in tow, gathered Tuesday at the state Capitol to rally in support of the measures.

Jessica McDonald shared a personal experience that ended tragically for her family.

McDonald said she had to return to work a few weeks after she and her husband had a baby girl, Quinn, about a year ago. She exhausted her paid vacation and sick leave benefits six weeks after Quinn’s birth, and the couple placed the baby in day care.

“It was not financially possible for me to go without pay any longer,” she said.

The baby became suddenly ill while at day care two days after McDonald returned to work.

“I rushed her to the hospital, where she passed away shortly after arriving,” McDonald said, holding back sobs. “While I’ll never know if I could have saved Quinn, what I do know is that I spent Quinn’s last day at work … and this will forever haunt me.”

A 2014 report by the International Labor Organization, an agency of the United Nations, found the United States and Papua New Guinea are the only two countries that provide no cash benefits of any kind to women during maternity leave.

Deborah Zysman, executive director of Hawaii Children’s Action Network, which helped organize Tuesday’s rally with the Hawaii Working Families Coalition, said a recent study found the average worker here would pay roughly $57 a year if Hawaii were to adopt the insurance model of using payroll deductions from all workers, regardless of employer size, to fund family leave benefits.

“We all as workers would pay in, like Social Security,” Zysman said. “And when you then have a qualifying life event … you would apply to the state, saying, ‘I want the benefit.’”

She said the proposal would help prevent employees from going into debt or poverty to take care of their families.

“People are already taking leave; they’re just going broke to do it,” Zysman said. “They’re tapping into their 401(k) if they have it or maxing out their credit cards. That’s how people take leave now.”

The Chamber of Commerce Hawaii, Retail Merchants of Hawaii and Hawaii Restaurant Association oppose the bills.